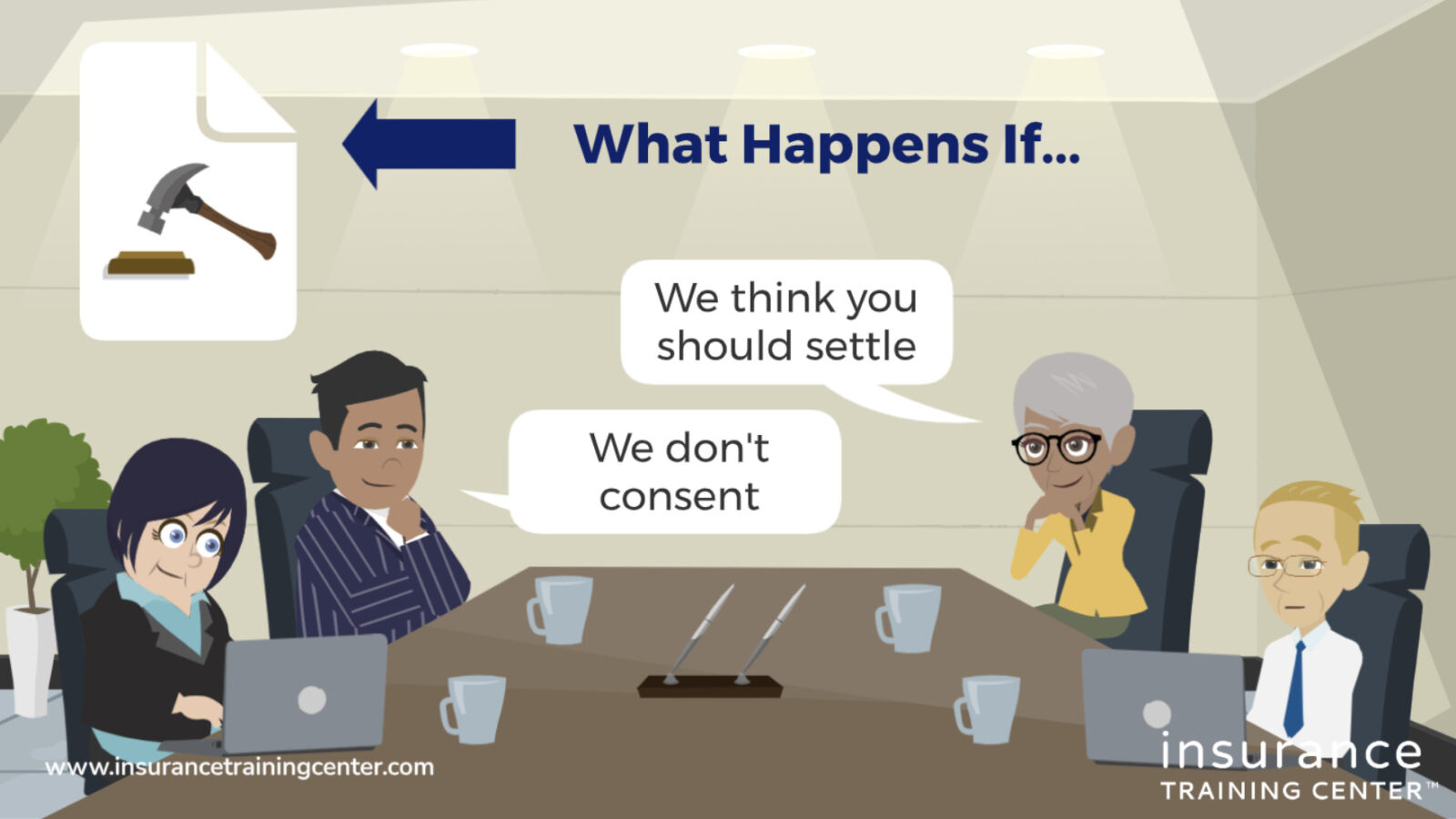 The insurance company determines that the cost of continued litigation may well exceed the cost of the settlement offer presented by the plaintiff. It recommends that the insured accept the offer. What if the insured prefers not to accept? Is that an option? Who pays the continuing legal costs? And where is this explained in the insurance policy?

What is a Hammer Clause?

A ‘Hammer Clause’ is an insurance policy provision which stipulates what happens when an insured does not consent to settle a claim, as recommended by their insurer.

Let’s back up here and explain what we mean:

This is where the hammer clause comes into place.

A hammer clause stipulates what happens when the insured does not consent to settle based on the insurer’s recommendation. Depending on the wording, if the insured doesn’t agree to a settlement they might be responsible for any defense and settlement costs going forward.

The Hammer Clause appears in policies such as Directors and Officers Liability (D&O), Employment Practices Liability (EPLI), Professional Liability, and Errors and Omissions (E&O), and is often found under the heading “Consent to Settle”.

Hammer clauses can vary greatly. Let’s go through an example to see how they work:

How does it work?

ABC Ltd hired Johnny to work at their company. A year into his tenure, Johnny committed a crime at work, and ABC terminated his employment. One month later, ABC Ltd received notice of a lawsuit filed against them by Johnny alleging wrongful termination. Johnny feels he’s been the victim of retaliation.

ABC Ltd notifies their insurance company of this claim, and under their EPLI policy the insurer starts funding the defense. As additional facts present themselves, the insurance company determines that the cost of continued litigation may well exceed the cost of  the settlement offer presented by the plaintiff. ABC Ltd rejects the settlement. They argue the reason for terminating Johnny was based on the crime he committed..  ABC Ltd fears that by settling, they are admitting to wrongdoing and their reputation would suffer.

The ‘Hammer Clause’ provision in ABC Ltd’s EPLI policy stipulates how ABC  will contribute to funding the defense if they choose to continue to defend rather than accepting the settlement the insurer recommended they take. That may mean they would have to shoulder all additional expenses going forward – both defense and settlement.

If their policy has what’s called a ‘soft hammer clause’, ABC Ltd could either accept the settlement as recommended by their insurer, or move forward with defending the lawsuit knowing they might have to absorb a portion of the costs.

The ABCs of Directors and Officers Liability Insurance

A fundamental course for every director and senior officer!
Understand the basics of D&O Insurance. This course provides a comprehensive overview of the legal duties of directors and officers, exposures, coverage options, indemnification and key claim reporting considerations.

Login
Login
Get Started
Get Started
We use cookies on our website to give you the most relevant experience by remembering your preferences and repeat visits. By clicking “Accept”, you consent to the use of ALL the cookies. However you may visit Cookie Settings to provide a controlled consent.
Cookie settingsACCEPT
Manage consent

This website uses cookies to improve your experience while you navigate through the website. Out of these cookies, the cookies that are categorized as necessary are stored on your browser as they are essential for the working of basic functionalities of the website. We also use third-party cookies that help us analyze and understand how you use this website. These cookies will be stored in your browser only with your consent. You also have the option to opt-out of these cookies. But opting out of some of these cookies may have an effect on your browsing experience.
Necessary Always Enabled
Necessary cookies are absolutely essential for the website to function properly. These cookies ensure basic functionalities and security features of the website, anonymously.
Functional
Functional cookies help to perform certain functionalities like sharing the content of the website on social media platforms, collect feedbacks, and other third-party features.
Performance
Performance cookies are used to understand and analyze the key performance indexes of the website which helps in delivering a better user experience for the visitors.
Analytics
Analytical cookies are used to understand how visitors interact with the website. These cookies help provide information on metrics the number of visitors, bounce rate, traffic source, etc.
Advertisement
Advertisement cookies are used to provide visitors with relevant ads and marketing campaigns. These cookies track visitors across websites and collect information to provide customized ads.
Others
Other uncategorized cookies are those that are being analyzed and have not been classified into a category as yet.
Save & Accept
Sign up here for exclusive deals and new releases!
Learn more
This is default text for notification bar
Learn more